Use Scientific Criteria Alongside Police Intuition for a Successful Interview

Use Scientific Criteria Alongside Police Intuition for a Successful Interview

We make mistakes in assessing the credibility of a witness and when detecting deception during police interviews. These errors occur for many reasons. In this article we will learn to identify how to avoid making these errors.

Below is a list of few suggestions that we will discuss. Understanding these will reduce the times we mislabel a truth-teller as a liar and prevent us from believing a well-told lie.

As you can see from this chart, criminals are the most accurate at detecting deception. Specialized training seems to help professions such as the Secret Service, Psychologists and Judges. Police officers and civilians perform little better than the flip of a coin.

Despite this, most of us believe ourselves to be better at spotting lies than the research supports. This self-deception is our personal bias and it increases the magnitude of our error in veracity assessment and lie detection.

Truth Bias Is An Uninformed Innocence

Our social expectations can make us vulnerable in our day-to-day interactions with others because we have a truth bias. Truth bias is a principle of cooperation that helps us to function as a community. It is a “social contract that our communication with each other is supported by the assumption that people will normally tell the truth and that people expect to be told the truth.” (Galasiñski, 2000, p. ix) For example, when we ask directions or when we ask the time, we assume we are being told the truth. This social contract makes us vulnerable in our conversations, during our inquiries and certainly during our interviews.

Deception is a far more complex human behavior than other types of human predatory behavior. The signals of conversational deception are often not as overt as the signals presented before a physical onslaught. If you are engaging a person with your truth bias in place, you may be missing the most subtle and fleeting cues of deception.

How Intuition Works For You

If I am teaching you to recognize danger, in a dark alley, on a car stop or during a field interview, I urge you to heed any internal warning signals that your body is giving you. These warning signals are the result of your highly attuned and very sensitive survival mechanism. The key factor in these dangerous settings is in the immediacy of the moment. When time compression and imminent danger are the primary drivers you may be best served to pay close attention to your intuition.

Even The US Supreme Court Acknowledges Police Intuition

Police officers are known to rely heavily on their intuition. Early in our careers we learn to start trusting hour intuitive skills on the street. Any veteran officer will tell you of a time that their own well-honed instinct was the difference between life and death.

Moreover, the U.S. Supreme Court has acknowledged a police officer’s recognition of the subtleties of human behavior in a 1968, landmark ‘stop and frisk’-case commonly referred to as Terry v. Ohio.

The case involved Cleveland, Ohio Detective, Martin McFadden. The court spoke specifically to Detective McFadden’s powers of observation when he spotted John W. Terry and John D. Chilton preparing to rob a store. This case stands today and is taught to every police trainee in the US. 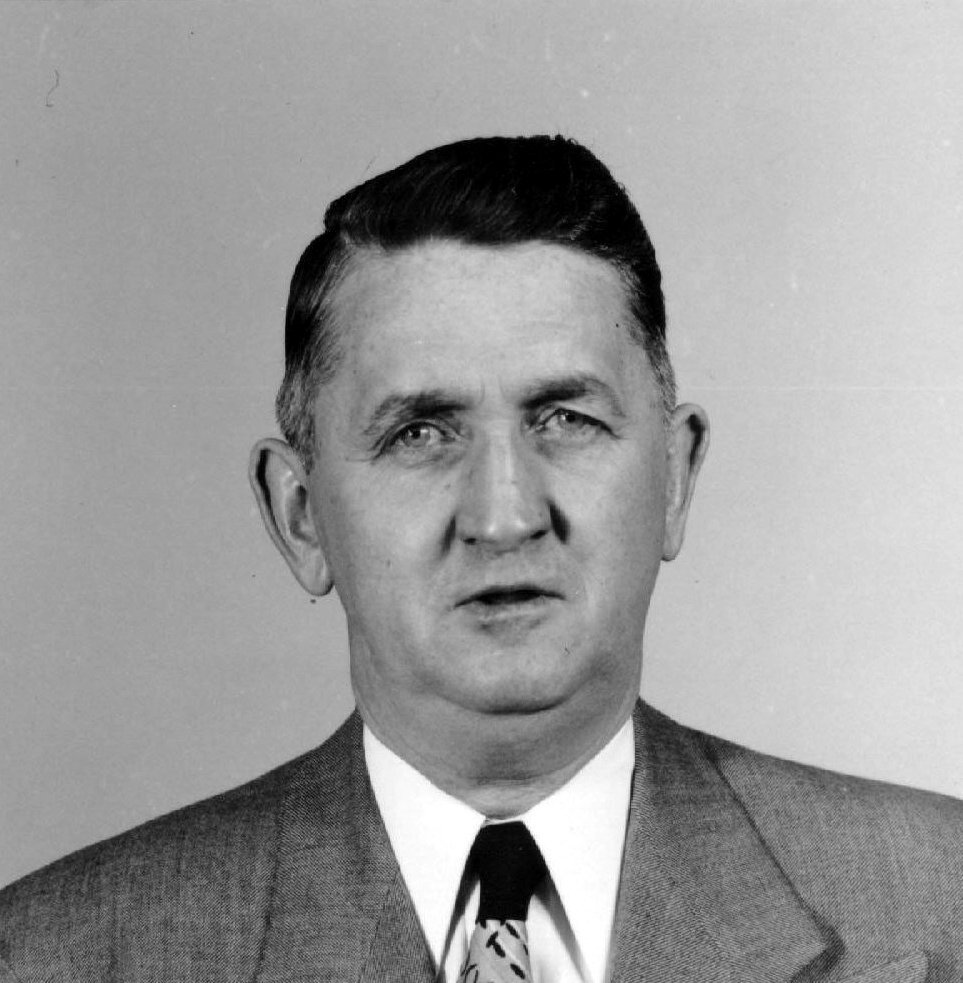 “Officer McFadden testified that he had been a policeman for 39 years and a detective for 35, … He explained that he had developed routine habits of observation over the years, and that he would “stand and watch people or walk and watch people at many intervals of the day.” McFadden added: “Now, in this case, when I looked over, they didn’t look right to me at the time.” [emphasis added] (Terry v. Ohio, 392 U.S. 1 (1968),” n.d., para. 5) 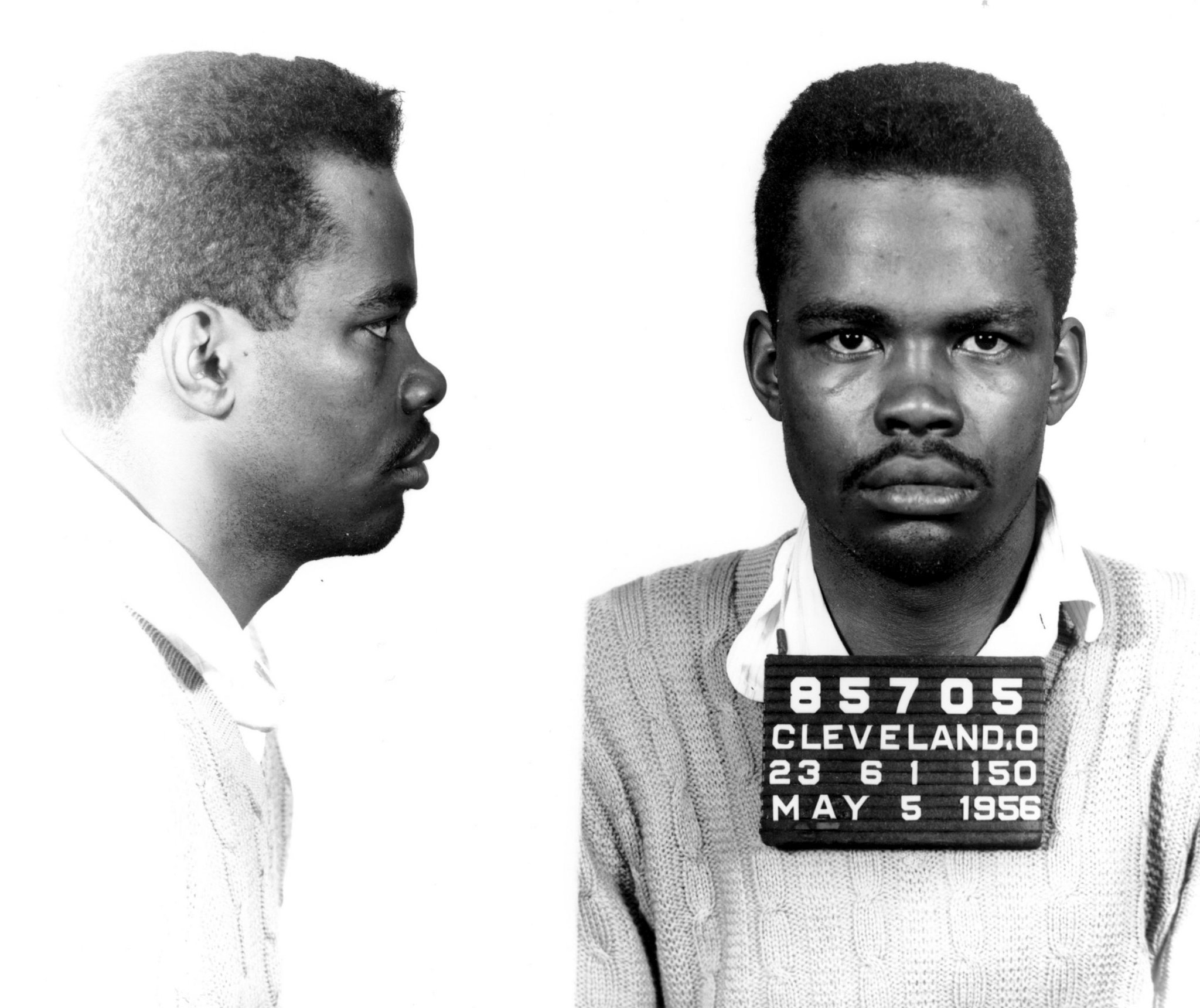 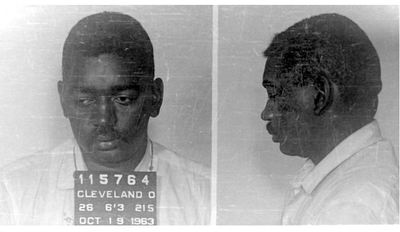 We rely on our intuition to alert us to danger signals in places that we feel less safe or when we encounter people that are not our friends, family or in our safe circle. Because we are so often successful in our reliance upon intuition we trust ourselves to accurately discern truth and lies.

Intuitions Without Concepts are Blind

Our intuition is a gift that we must learn to use outside the influence of bias: we do that by combining concepts of understanding with our intuition. In order to form a valid and objective credibility assessment, we must hone our intuitive skill by carefully and deliberately considering scientifically validated criteria within our analysis. 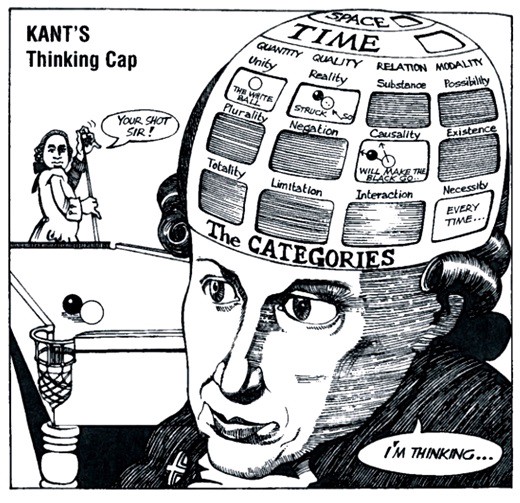 “Thoughts without content are empty, intuitions without concepts are blind.” (Kant, 1998, p. 193)

The Relationship Between Accuracy and Precision

When teaching behavior analysis, during truth-lie exercises, I frequently observe participants identify a role player as a liar. When questioned, the student does not provide specific scientific behavioral criteria for their conclusion.

The student should develop their hypothesis and test it with interview strategies that are designed to elicit behavior from deceptive role-players. A student that is solely using intuition to declare the role-player as truthful or deceitful will not have any specific behaviors to cite that will support their decision.

While the student may be correct or accurate in that the role player is lying, without attributing their decision to specific behavioral criteria they have no information with which to adjust their decision making process. Neither can they reaffirm that they are interpreting the behavioral clues correctly when they get it right. So, even if they are accurate on this single occasion, they have not prepared a foundation from which to make adjustments to their analysis.

Precision is the ability to repeat their performance with consistency. In order to consistently identify truth or lie, the student of behavior analysis must refrain from solely using intuition. A well-disciplined observer will hone intuition by refraining from a veracity judgment without the consistent application of scientific criterion. Scientific concepts applied alongside and in support of our intuition produces a precision diagnostic.

As a Police Sniper-Instructor, I have seen this same error on the gun range. The process of adjusting a precision riflescope so that the point of impact on the target paper is the same as the point of aim is called, zeroing your rifle.

New or untrained officers will fire one round on their target. If the round does not impact the precise point where they were aiming they will adjust their scope in order to move the point of impact. When they adjust their scope, based off of the one-shot-group, they are not taking into account variables, other than scope adjustment, that may have caused the round to miss. Other variables may be wind, or the round itself, or the shooter may have interacted with the rifle such that they caused the miss. Take a look at the target. If A is the point of aim and B is where the round actually impacted then one might assume that the marksman needs to adjust the scope four clicks to the right and four clicks down so that the point of aim and point impact are one and the same. 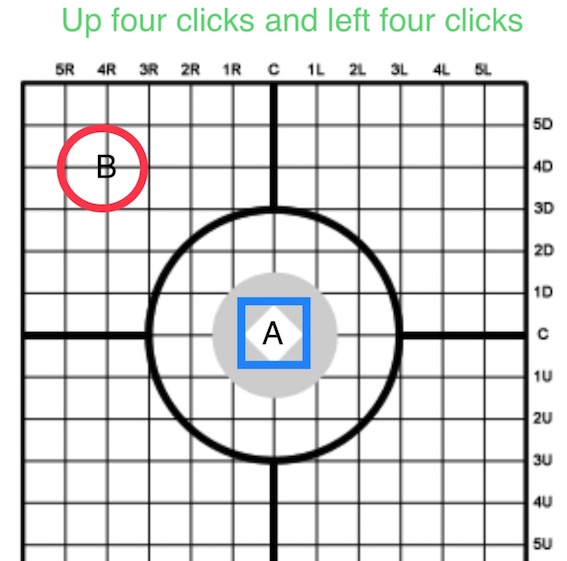 A well-trained marksman knows to shoot a group of rounds, usually five, in order to see any patterns that exist or if a pattern even exists. Once there is a pattern of rounds clustered around one point of impact the marksman can then adjust the scope according to the pattern. Because the new shooter is prematurely making adjustments without using clusters of rounds (data) they end up chasing their rounds around the paper, never being able to refine their shooting.

Assessing behavior based on small increments of data, without testing and confirming a hypothesis, is like adjusting a scope based on a one-shot-group. This is called thin slicing and it is a form of intuition. Most interesting is that when people thin slice, “they are often not able to report the factors that influence their judgments.” (Thompson, 2012, para. 2)

When assessing human behavior combine your intuition with clusters of articulable behavioral clues so that you can make adjustments in your accuracy. By doing so you will be able to give a precise label to the behavior you are observing.

Much of Deception is Cloaked Within a Veil of Truth

Another factor that contributes to our inaccuracy is our social tendency to classify a person or their communication as being binary: all-truth or all-lie. In reality, much of deception is cloaked within a veil of truth. We have a tendency to assess credibility by stacking behavior to one side or the other. 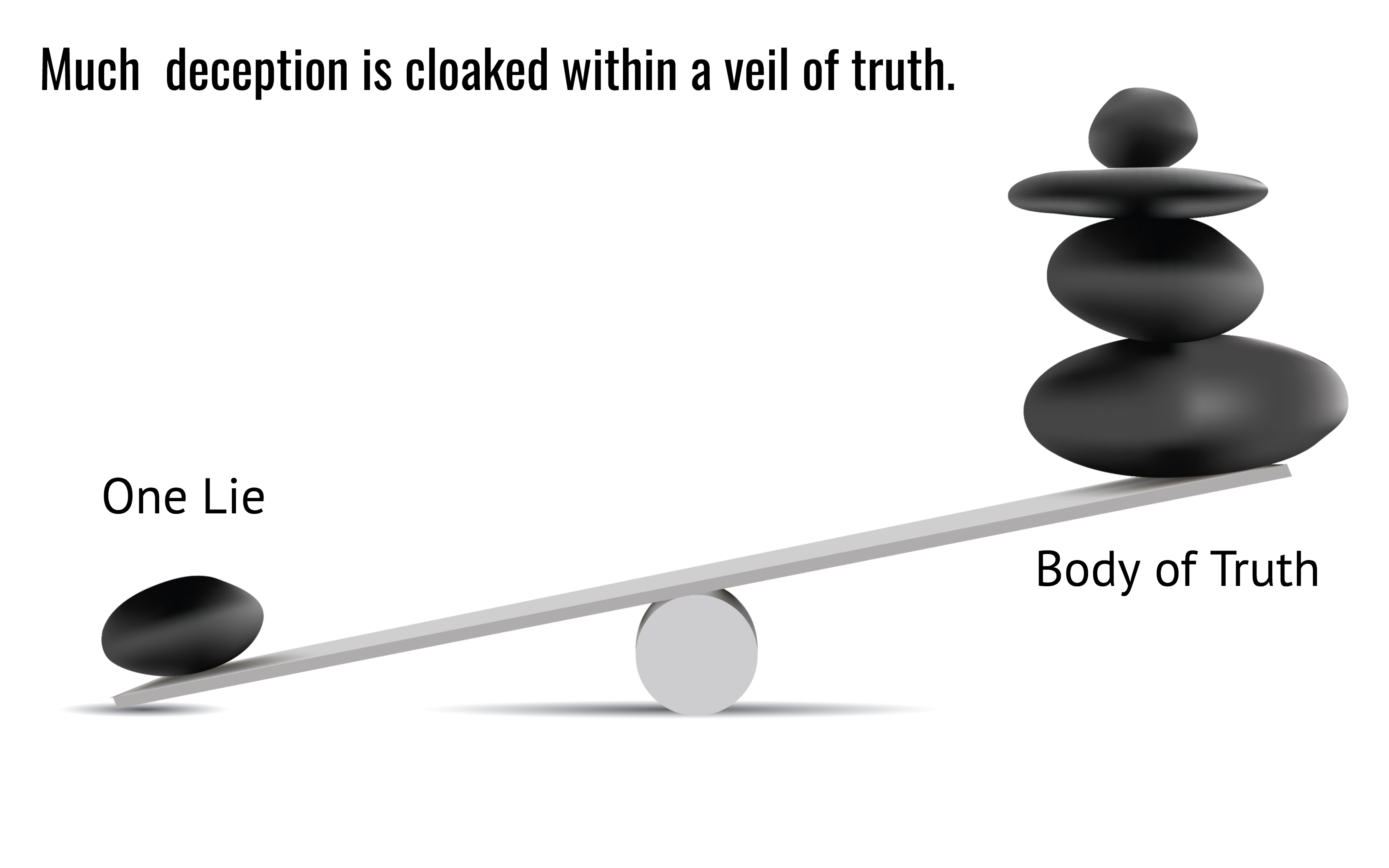 As you can see from the photo, when we stack the majority of clues on the truth side we will assess the communicator to be credible. To our jeopardy, we will ignore the one lie because we were able to observe more truthful clues. When a liar constructs their preferred version of reality they obscure it with a body of truthful and verifiable facts. Because of our weighted analysis of the prominent and observable truths, we ignore the signals or cues of deception.

An example of obscuring truth within reality might be when you say something that’s only half true and omit the full truth. Consider the artist that asks your opinion about his painting. Others that have seen it have told you that it is actually horrible. Your respond to the artist, “Everyone is talking about it!” You have successfully omitted your opinion that the painting is ugly and hidden the truth that everyone else thinks so too.

When you see an inconsistency or a possible lie within a body of truth you now have a point of focus. Do not disregard it. Narrow your inquiry specifically to this behavioral inconsistency until you can affirmatively either disregard it as a behavioral anomaly or label it as an indication of deception.

Our Ability to Recognize Emotion 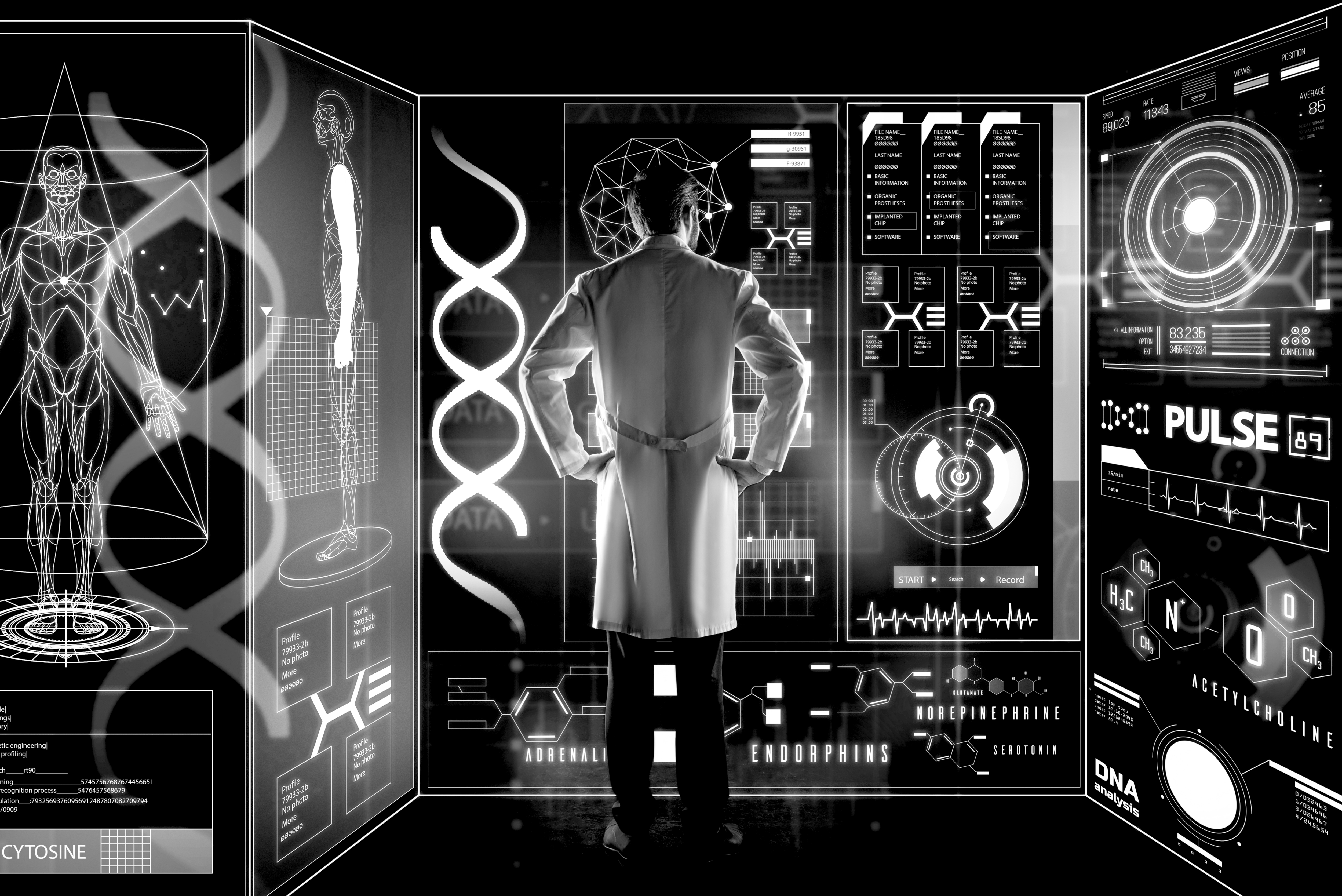 We use many ‘channels’ to communicate with each other. These channels include; body, face, voice, verbal content, verbal style, and psychophysiology. We have been practicing listening to these signals since birth and we are quite good at it: so good, it is second nature or intuitive. We often easily know when a child, a significant other, our peer or our boss is experiencing an emotion that may not necessarily be purposely revealed to us and there may even be an effort to conceal or disguise it. Nevertheless, we recognize the signals.

As I said earlier, studies show that we are no better than chance at identifying truth or lie. I see similar results when I test students in my behavior analysis workshops. They have very high error rates when they are trying to distinguish one emotion from another. As an example, they have difficulty discerning true sadness from feigned sadness. They cannot distinguish a genuine smile from a forced and false smile. They cannot identify when a mother, that has killed her children, is falsely crying in order to convince her audience that she is experiencing grief.

To help them improve their recognition of genuine vs. false emotions and to properly label the emotion they must first accurately recognize and label their own emotions. Once they learn to identify the distinct feeling and physiological cues that are specific to each emotion they are much more accurate in identifying genuine versus fake emotional displays in others. There is no way around the fact that in order to be accurate at behavior analysis, we need emotional awareness training.

Kant, I. (1998). Critique of pure reason (The Cambridge Edition of the Works of Immanuel Kant ed.). Retrieved from http://strangebeautiful.com/other-texts/kant-first-critique-cambridge.pdf